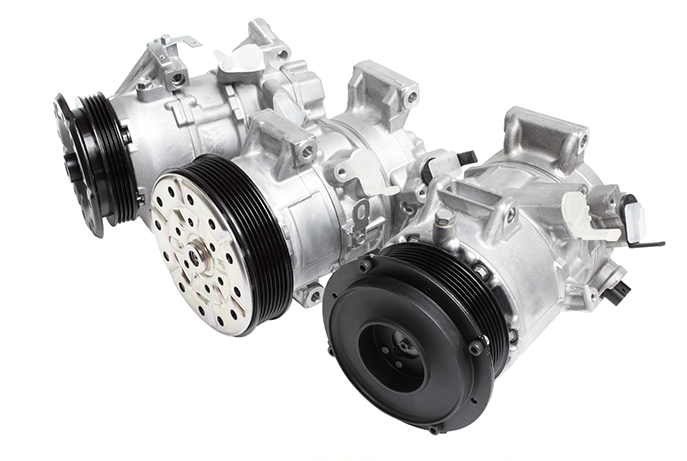 Written by admin on February 5, 2022. Posted in Uncategorized.

The refrigerant in the automotive system is the substance which not only transfer heat from the passenger compartment in the vehicle to the condenser outside of the car and then released the heat into the atmosphere, but it also cools the compressor down reducing the total heat of compression preventing the compressor from building up excessive pressure and temperature. A poor lubricated compressor could be operating in temperatures that could get up to 800 F

Electronic controlled variable displacement compressors could be clutch or clutch-less designs. The ac  compressor has a swash plate that rotates to reciprocate pistons, which compress refrigerant. The swash plate is allowed to change its angle which changes the stroke rate of the piston. They are electronically controlled using sensors and an Electronic Control Module (ECM)

Electronic controlled variable displacement compressor is always running even when the a/c is off. The ECM changes the rate of displacement, but the compressor is spinning connected to the drive belt without any clutch to disengage.

Lubrication occurs by using a sump in which the connecting rod splashes oil around the inside of the compressor. Some automotive air conditioning compressors use an oil pump to circulate the oil, like an engine lubrication system. Lubrication is accomplished while the ac compressor is running and there is refrigerant and oil circulating back to the compressor.

The (ECVD) clutch-less compressor should not be operated  without refrigerant in the system  to carry lubricant.

These (ECVD) clutch-less compressors do not have a conventional clutch, meaning the compressor shaft turns all the time driven by the accessory drive belt, even when the a/c is commanded  off from the hvac temperature control assembly panel!

The internally controlled variable swash plate compressor changes the swash plate angle by a MCV (Mechanical Control Valve) in accordance with fluctuation of a suction pressure.

The externally controlled variable swash plate compressor changes the swash plate angle by an ECV (Electric Control Valve) in accordance with an electrical signal from the heater & A/C control unit.

Without the right tools This new compressor output control technology can make it difficult to determine if the poor ac performance is being caused by a computer control malfunction or another problem in the refrigeration system or cooling system of the vehicle. This can result in an expensive misdiagnosis and unnecessary compressor replacement.

These are different tools that could be used for correct testing a diagnose of this units:

1.   A scan tool and checking PWM signal from the module to the ECV compressor .

2.  Handheld ECV Compressor tester unit to manually control the ECV on the compressor and increase or decrease (PWM)  the pumping capacity of the air conditioning.

3.  A scope can be used by carefully back probing the connector to the control valve and connecting the scope leads to the two wires and check the PWM wave signal

With a large refrigerant undercharge, oil is pumped out from the compressor and becomes trapped in the evaporator or other ac components of the system and is unable to properly return to the hvac compressor. The amount of oil in the compressor can get down to dangerously low levels creating excessive heat and, in most cases, leading to failure of the unit. Some Air conditioning tests has shown that with an undercharged ac system, the oil amount in the compressor was reduced by over 57%.

SYMPTOMS OF A BAD OR FAILING AC COMPRESSOR